“Everybody wins when they invest time, talent or treasure into their community.” – JC Pfeiffer

Give a Donation to Honor JC Now

For JC Pfeiffer, a simple phrase such as “planting a seed” has many meanings. On October 6, 2020, he was honored for all the seeds he planted in Winona as the Winona Community Foundation presented him with its 2020 Founders Award. This award is given to an individual in the community who has demonstrated an extraordinary commitment to improving life in the Winona area through the use of their time, talent and treasure.

JC was born in Rochester, Minnesota and raised on a farm near Mazeppa. He attended Winona State University and while studying in Winona, met his wife, Arlene Ledebuhr of Stockton, whom he wed in 1962. He and Arlene moved to California where he finished his degree at Long Beach State University and received his CPA license (certified public accountant) while starting their family. They eventually returned to the Midwest and JC joined his first Rotary Club. JC and Arlene moved around Wisconsin for his career and raised three children. Around 1985, JC decided to leave his accounting career and move into nonprofit work. He became the Executive Director of the St. Croix Area United Way for nine years and helped establish the St. Croix Valley Community Foundation. Longing to return to the beautiful Winona area, Arlene and JC moved back to Winona in 2000. At that time, JC knew exactly where he wanted to spend his time: the Winona Area Chamber of Commerce Ambassadors, the Rotary Club of Winona and the Winona Community Foundation. He wanted to focus on organizations that make a direct impact on the local community. JC shares, “Everybody wins when they invest time, talent or treasure into their community.”

JC has a fifty-year Rotarian career and just recently “retired.” When asked about a memorable moment in his history of Rotary work, he recalls when women were allowed to join the Rotary Club in 1989. He said the addition of women improved the organization and was important. JC was also named Rotarian of the Year in 2016.

At the Winona Community Foundation, JC started as a volunteer but was quickly contracted to help the Foundation earn the National Standards for U.S. Community Foundations accreditation. The staff at the time described this as a major undertaking but successful. And at the end of the job, JC donated his pay back to the Foundation. After this project, he continued to work with the Foundation, advocating and promoting its services and benefits. He even started three funds himself; the JC and Arlene Pfeiffer Fund, Connect People to Nature Fund, and the Rushes Wilderness Fund. It’s clear that nature is a passion of JC’s. He is especially proud of the Connect People to Nature Fund which has awarded money toward the Sugarloaf Access trail, the Flyway Trail project and Camp Wenonah for new signage for community members to enjoy. He once wrote, “Isn’t it great to be part of something that people really enjoy and that can connect them closer to nature?”

In addition to his work at the Foundation since being back in Winona, JC has volunteered with the United Way, Volunteer Services, Friendship Center and Winona Family YMCA. People that worked with JC describe him as collaborative, passionate, knowledgeable, likeable, trustworthy, and inspirational.

JC and Arlene enjoy a quiet retired life in Winona. They have three adult children, two grandchildren and one great-grandchild.

Humbly accepting this honor, JC imparts, “Arlene and I only planted small seeds. A lot of people are involved in growing the community.”

We celebrated JC on October 6th and thanked him for planting seeds and improving life in the Winona area. Now he wants to help YOU plant a seed by offering a Field of Interest Fund Challenge. There are matching dollars available to start a new Field of Interest Fund at the Winona Community Foundation. JC started the Connect People to Nature Fund which funds projects that connect to people to nature. This fund supported the Flyway Trail and Camp Wenonah signage project. What’s your interest? Children? Literacy? Parks? Contact Nancy Brown, President/CEO, to learn more about this challenge!

Give a gift to honor JC Pfeiffer as the 2020 Founders Award recipient! 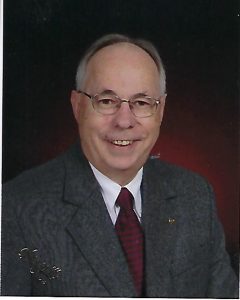 JC wants to challenge you! There are matching dollars available to start a Field of Interest Fund at the Foundation. What’s your interest? Nature? Animals? Children? Contact Nancy Brown to learn more about the Field of Interest Challenge!